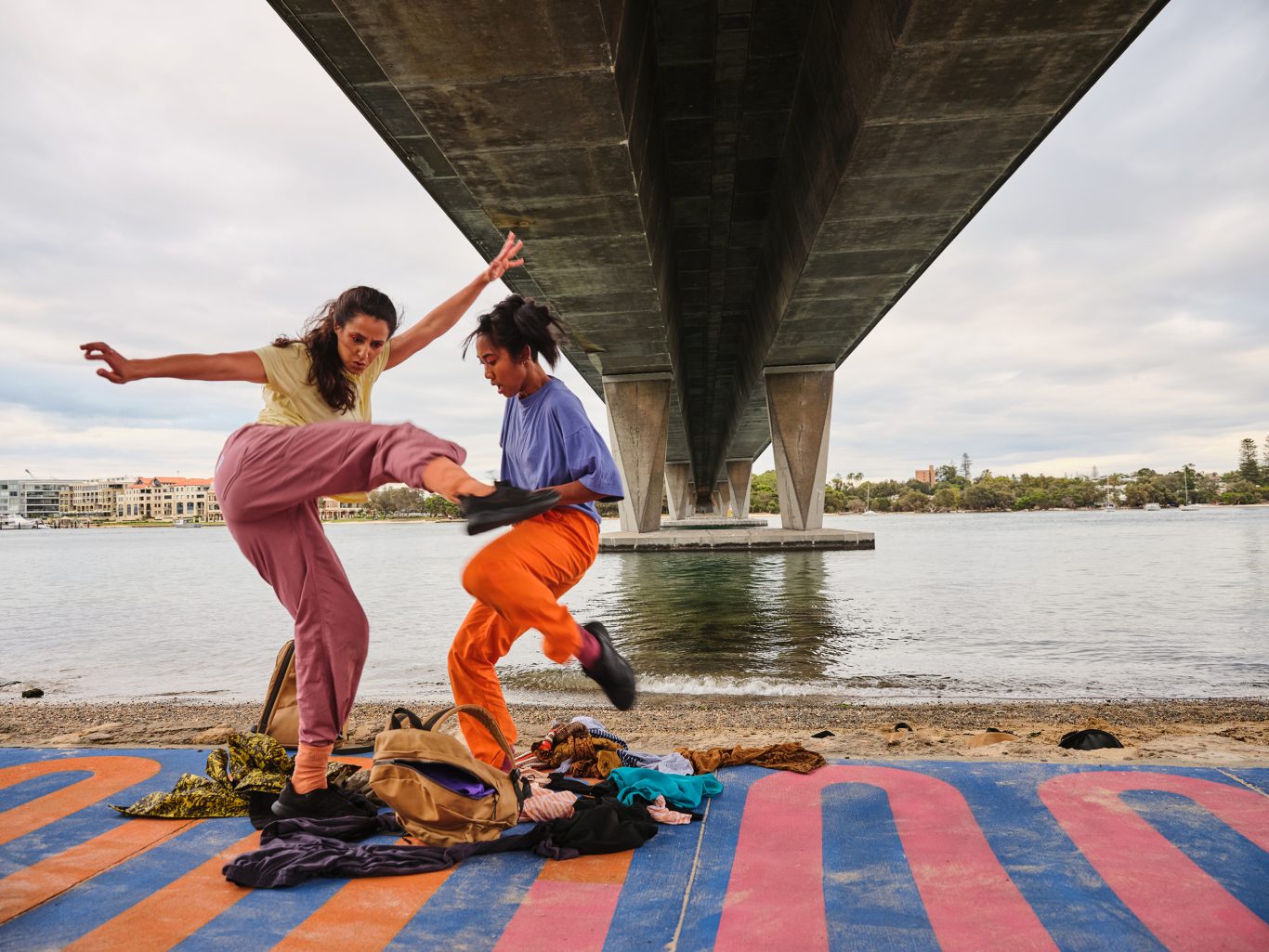 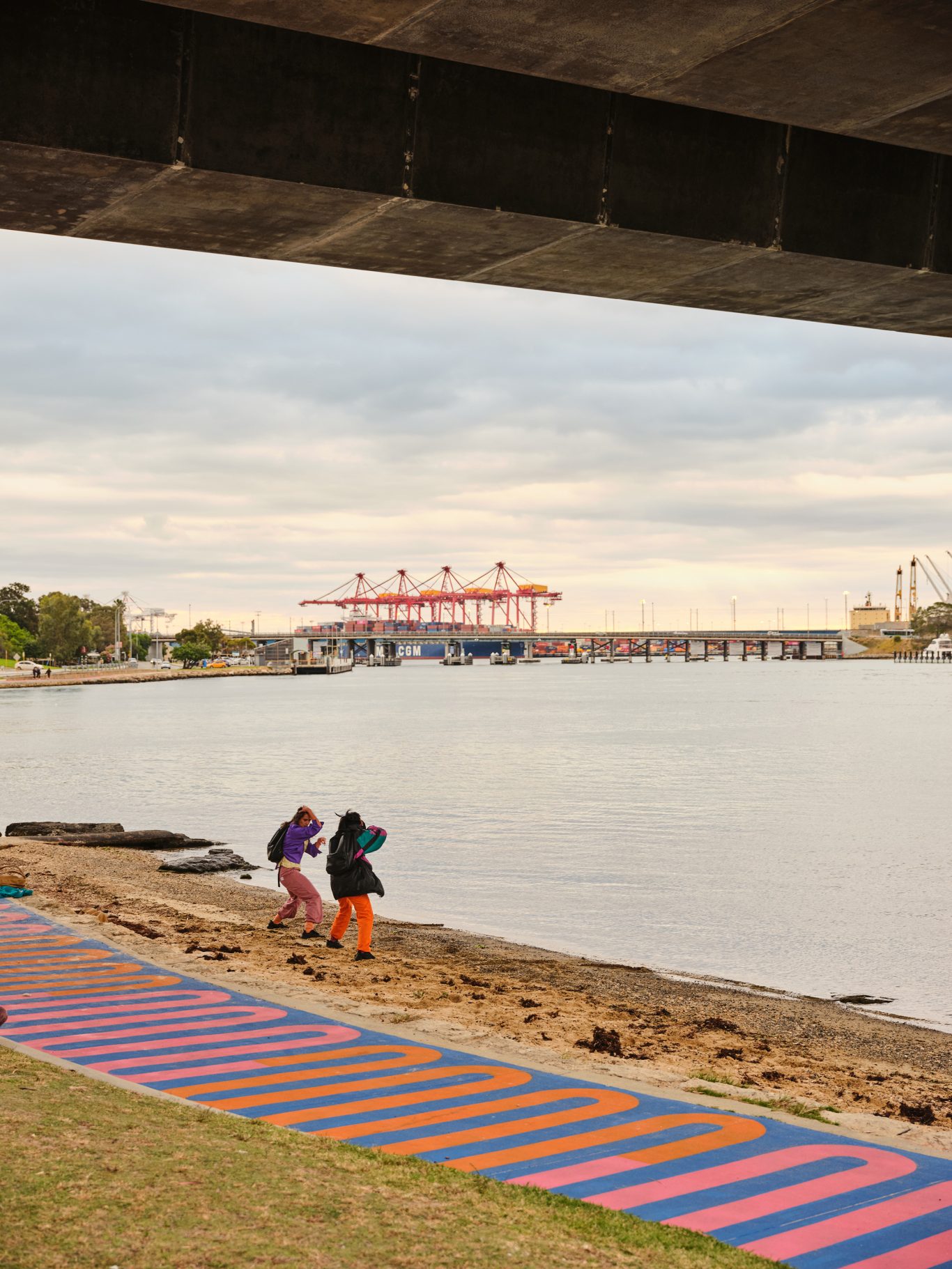 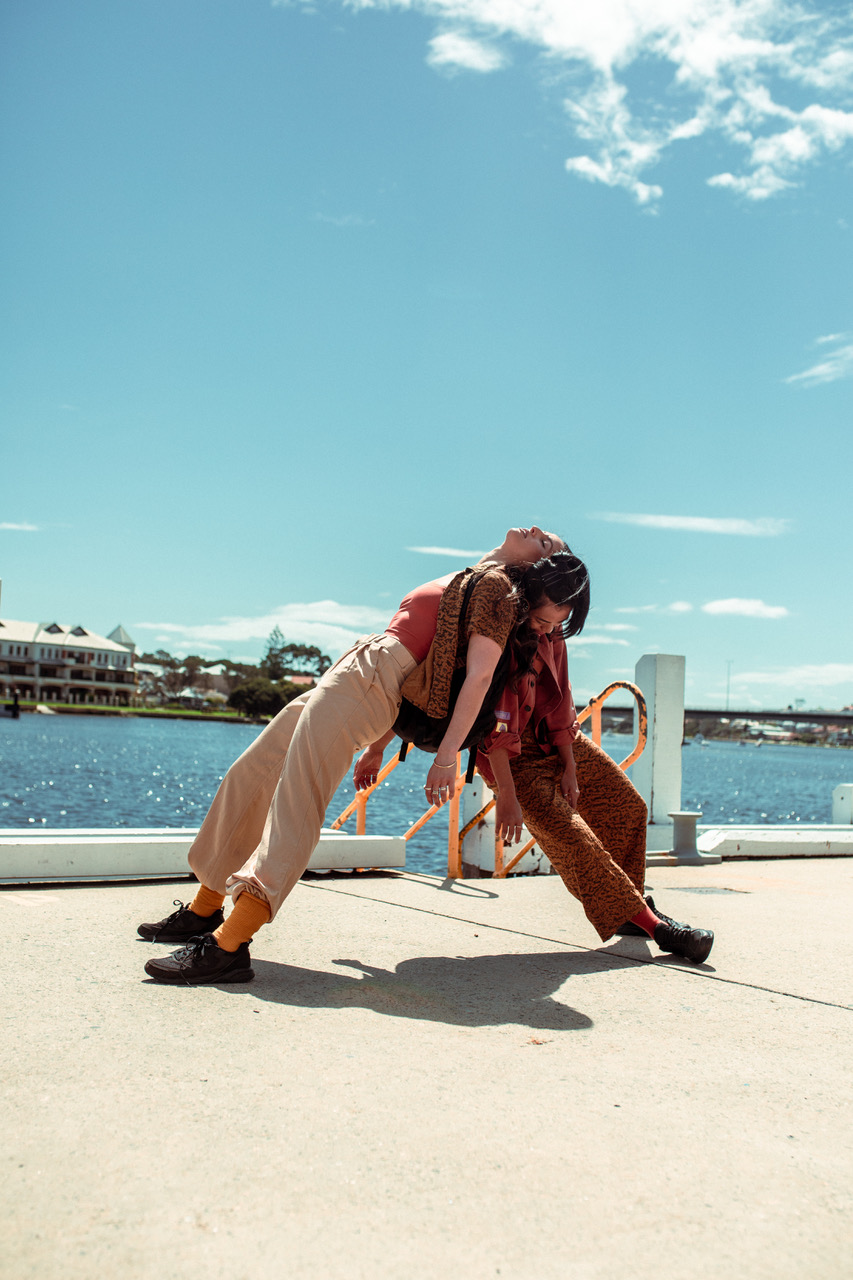 A sunken vessel resting eerily on the riverbed is the backdrop to a new duo by dancers May Greenberg and Zee Zunnur, set to a sound score by Felicity Groom.

Unfolding along the pathway and the water edge beneath the Stirling Bridge, Uncountable explores the excesses and weight of consumerism through movement. Visitors are invited to journey with the dancers and asked to share in their burdens, in a dynamic new work which questions wealth, stability and remembers the weightlessness of water.

May Greenberg is a Jerusalem born independent artist based in Perth WA, mostly known for performing and creating site specific choreography. Her recent creations include Escapism 2020 presented on the staircase at the State Theatre Centre, and Disclaimer: on the rooftop of the Alex Hotel as part of the last two SITU8 seasons presented by STRUT Dance. May’s experience as a performer began with Ohad Naharin’s Decadence presented by STRUT Dance as part of the 2016 MoveMe Festival, and continued onto works which include Brooke Leeder’s Structural Dependency for Perth Festival 2021 and RADAR as part of the 2019 Fremantle Biennale, A Midnight Visit as part of Fringe World 2019, A Night Out! by Natalie Allen which toured regional WA in 2019 and In Good Company 2021. May’s most recent development for her solo The Interface was presented by Co3 Australia’s IN HOUSE season, and has been commissioned to choreograph a performance for the opening of Karrinyup Shopping Centre supported by Co3 Australia.

Zee Zunnur is a movement artist who currently dances with Hofesh Shechter Company (UK) and an Associate Artist with Bhumi Collective (Singapore). She started dance training at a young age in traditional Malay dance. Being part of the pioneer batch at School of the Arts Singapore and danced with T.H.E. (Second) Dance Company, her love for contemporary dance brought her to London and graduated from London Contemporary Dance School with a scholarship from the National Arts Council (Singapore) and Leverhulme Trust (UK). Whilst in the UK, she has worked with choreographers and companies such as Victor Quijada (RUBBERBAND), Punchdrunk, Dane Hurst and Just Us Dance Theatre. Having toured internationally as performer, she has also been invited as a guest artist and choreographer with various companies, festivals, residencies and schools such as with T.H.E. Dance Company, M1 CONTACT Contemporary Dance Festival, Edinburgh Fringe Festival, Ignition Dance Festival, Esplanade da:ns festival Singapore, Singapore Biennale and more. Being based in Australia now, she has worked with Sydney Dance Company, STRUT Dance, Co3 Australia, Marrugeku, Mitch Harvey Company, James Vu Anh Pham, Brooke Leeder and  WAAPA. She is currently a mentor for a dance project funded by the Propel Youth Arts WA and as rehearsal director for Mitch Harvey Company’s upcoming show MindCon.

Felicity Groom is a producer, composer and musician from Western Australia. Felicity uses a range of instruments to bring works to life including the saw, chromaharp, guitar, voice, piano and Ableton. As well as composing for specific projects, Felicity has released three acclaimed albums and one in a collaborative project called Rokwell & Groom. Her accolades include album of the week on Triple J for Gossamer, a four and a half star review in Rolling Stone for album Hungry Sky and an international synching deal with French jewellery brand Cartier for Oh Jesus which was composed for playwright Nathaniel Moncrieff’s Tinkertown, performed at the Blue Room Theatre in 2012. The most recent performances of works include the collaboration with choreographer May Greenberg for TURA New Music and Strut Dance’s takeover of the State Theatre Of WA;  Situ-8 for a “soft and piercing” (Pickup, J. 2020. Arts Hub) piece called Escapism. This song caught the attention of Melbourne based label Blossom Rot Records who will release it on a compilation on June 18th. Felicity’s compositions are on display via QR codes in the City Of Vincent’s Lightbox Laneway. This exhibition is an audio-visual collaboration between herself and local visual artist May Bluebell. Felicity is currently in development with choreographers Laura Boynes in a work called Equations Of A Falling body and choreographer Daisy Sanders work A Resting Mess as well as co-producing a work with renown east coast producer Anna Lafferty.

Geordie Crawley is a Boorloo/Perth based playwright, dramaturg, and theatre maker. He cofounded the multiple award winning independent theatre company Rorschach Beast, and is a curator for STRUT’s site specific dance platform Situ8. Geordie’s playwriting credits includes Logue Lake, Hive Mind, Girl in the Wood, and All That Is Solid Melts Into Air, and The Narwhal. He’s worked with The Last Great Hunt, Spare Parts Puppet Theatre, and The Big HOO-HAA!! He also created the smash hit Impro Musical BangTown!

Beneath the Stirling Bridge, East Fremantle

This is a standing-only event. Attendees are invited to bring their own chairs if needed and advised to bring comfortable shoes, and water.

While latecomers will be admitted, latecomers are asked to enter quietly and without disturbing other attendees.

This is an outdoor installation, and while some limited shelter is available, we recommend bringing a hat and sun protection.

Shelter can be found at the public gazebo near the work, and at surrounding venues. However, the artwork is outdoors and viewing locations have limited protection from the elements.

The viewing location is accessed along a flat pedestrian footpath. Accessible parking is available nearby at J Dolan Park.