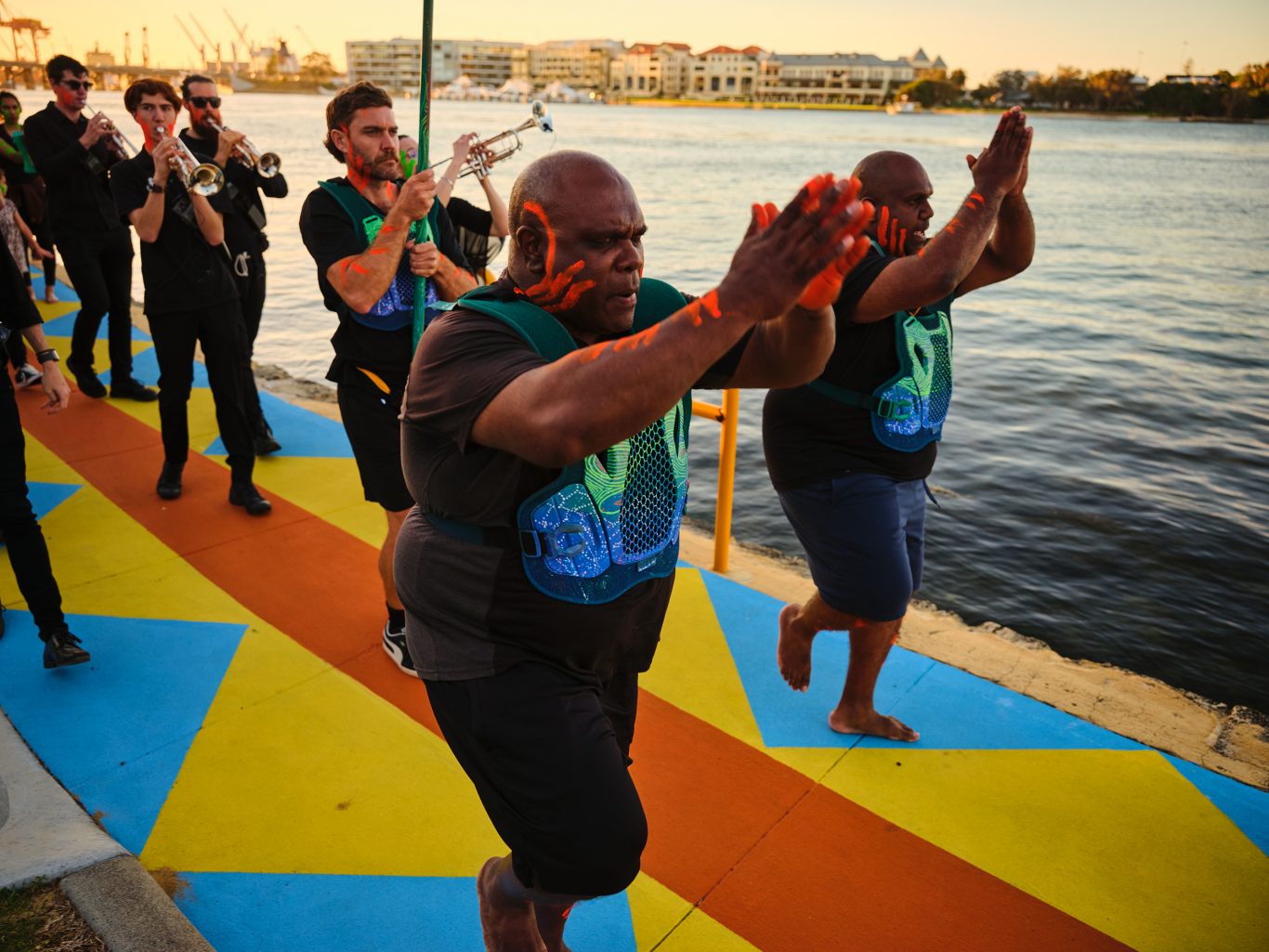 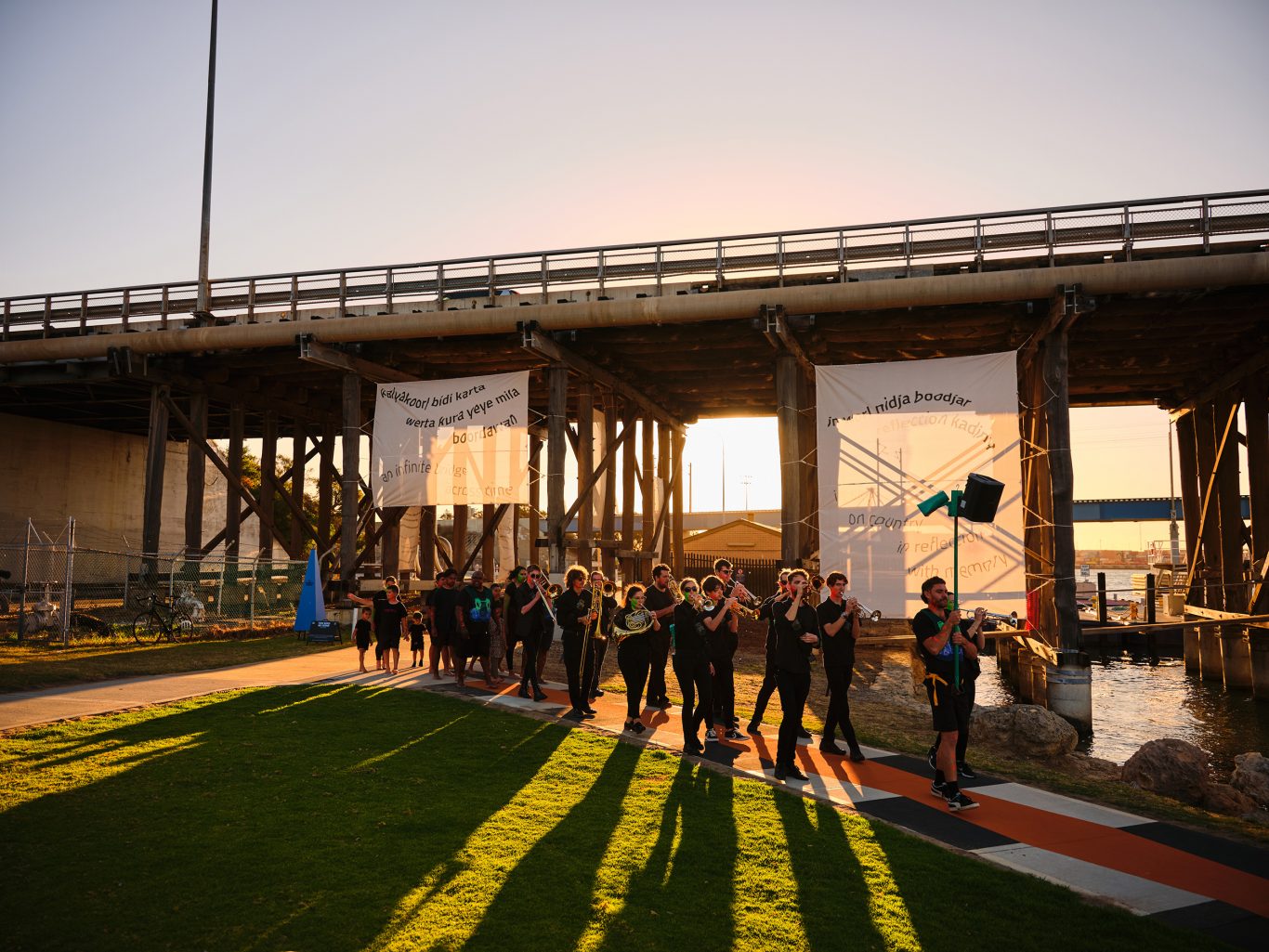 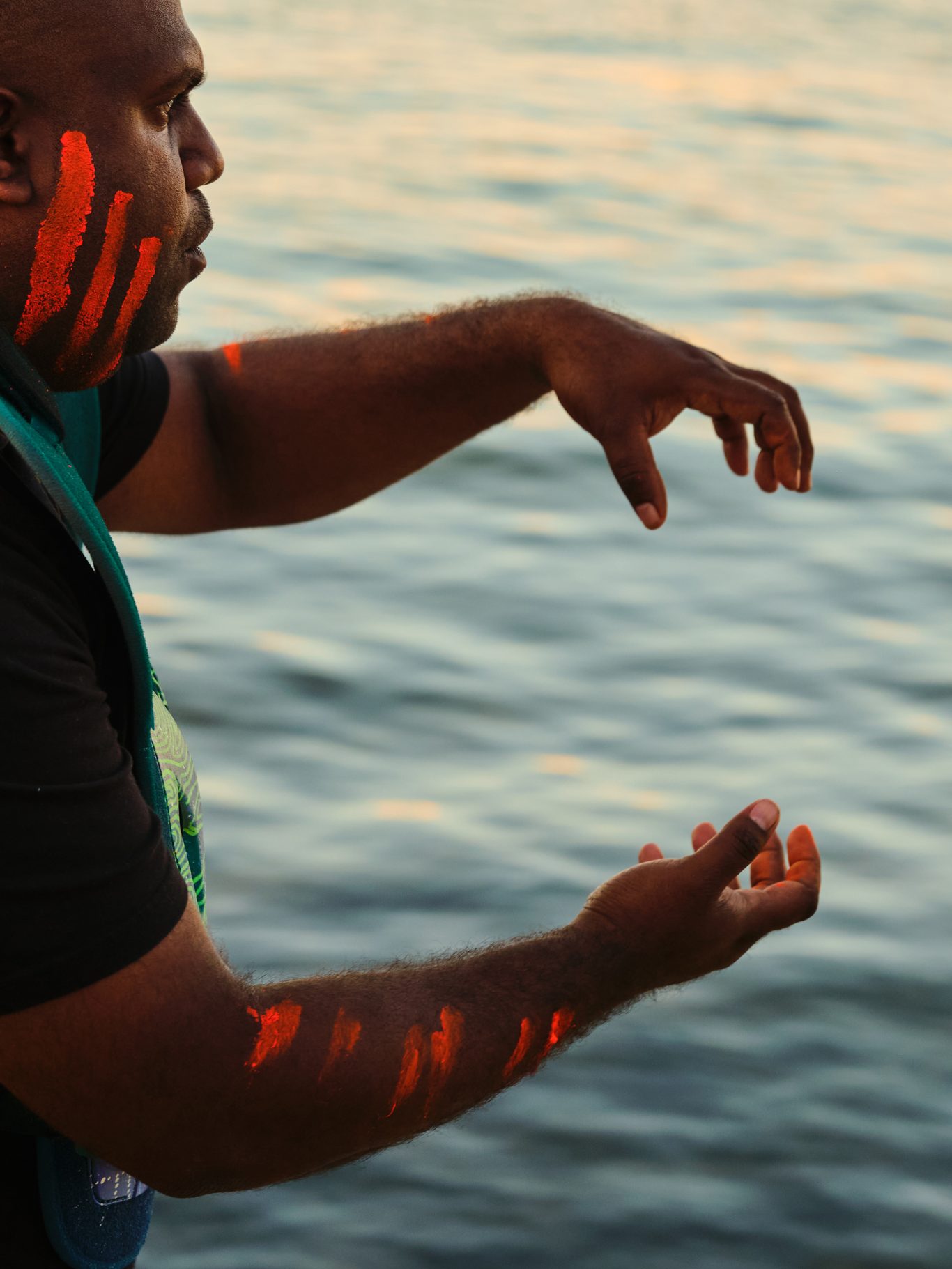 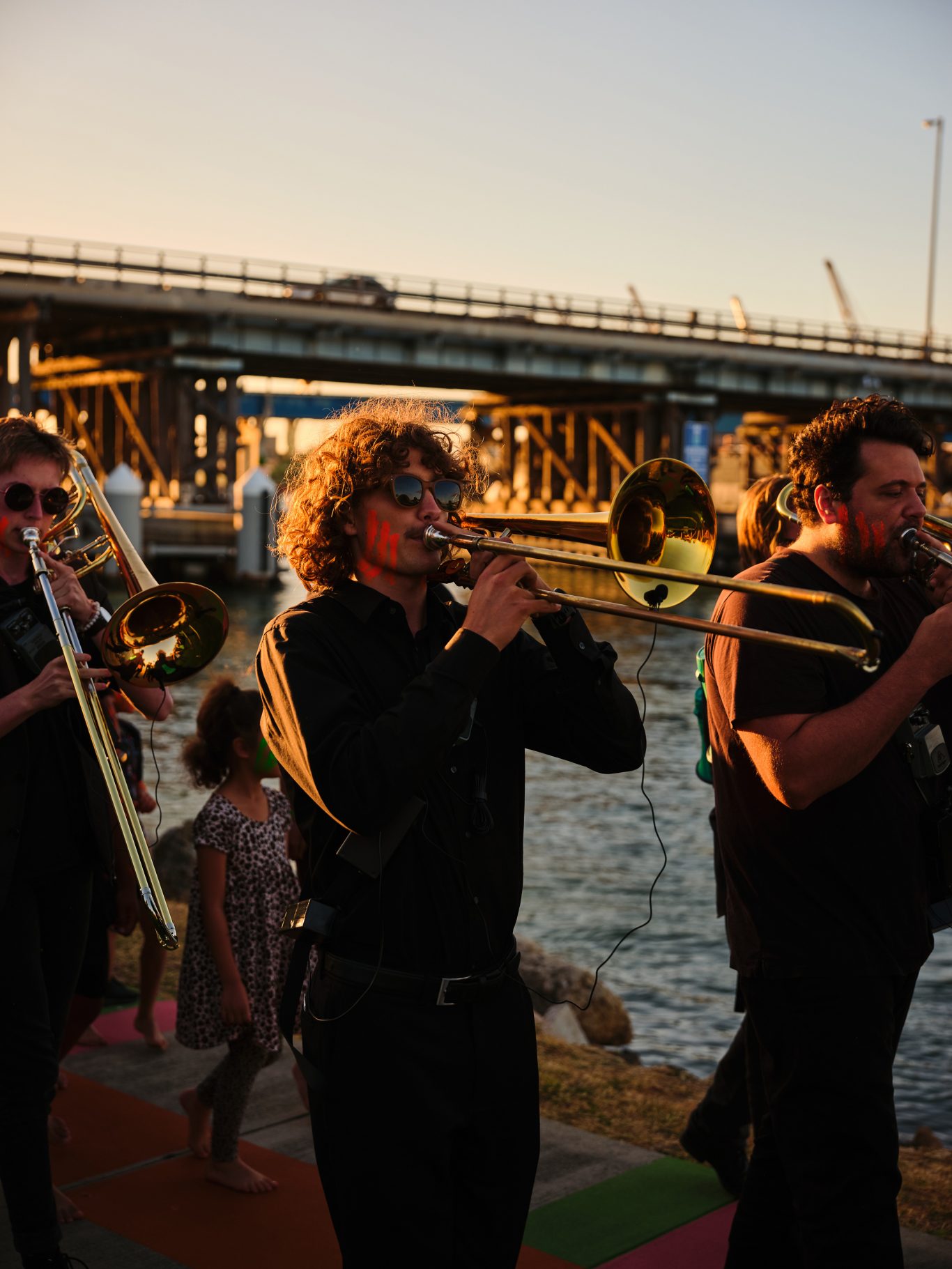 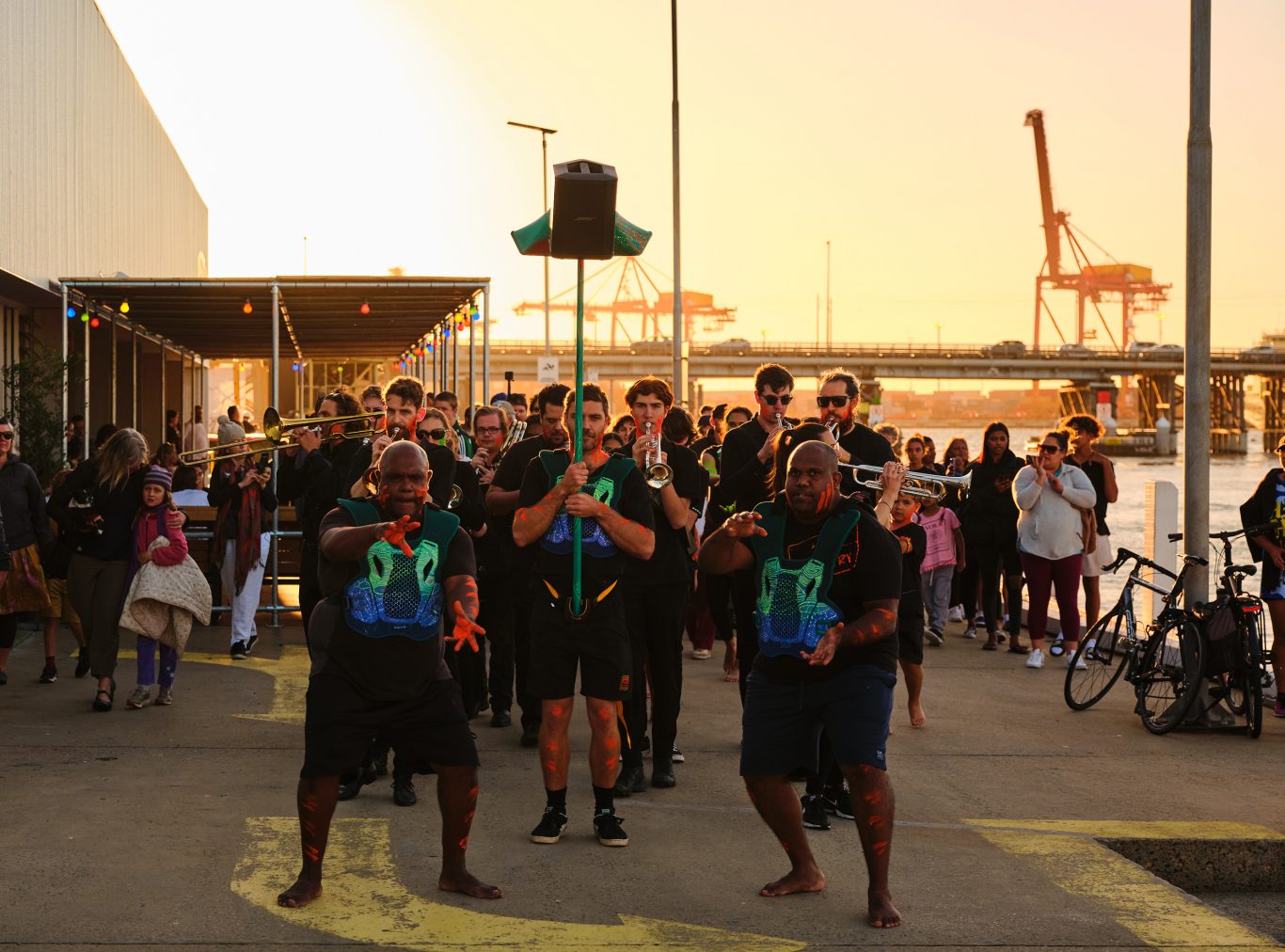 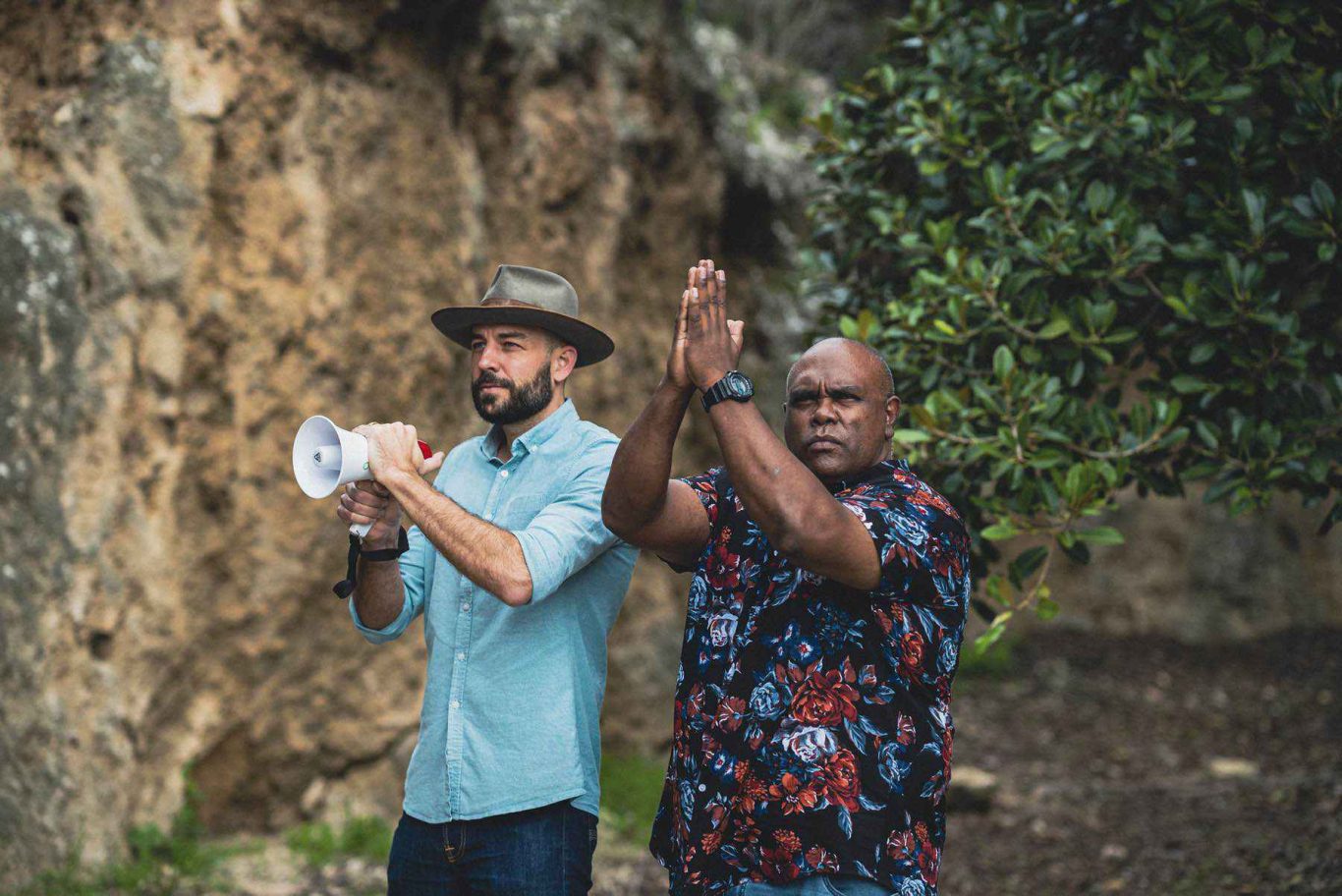 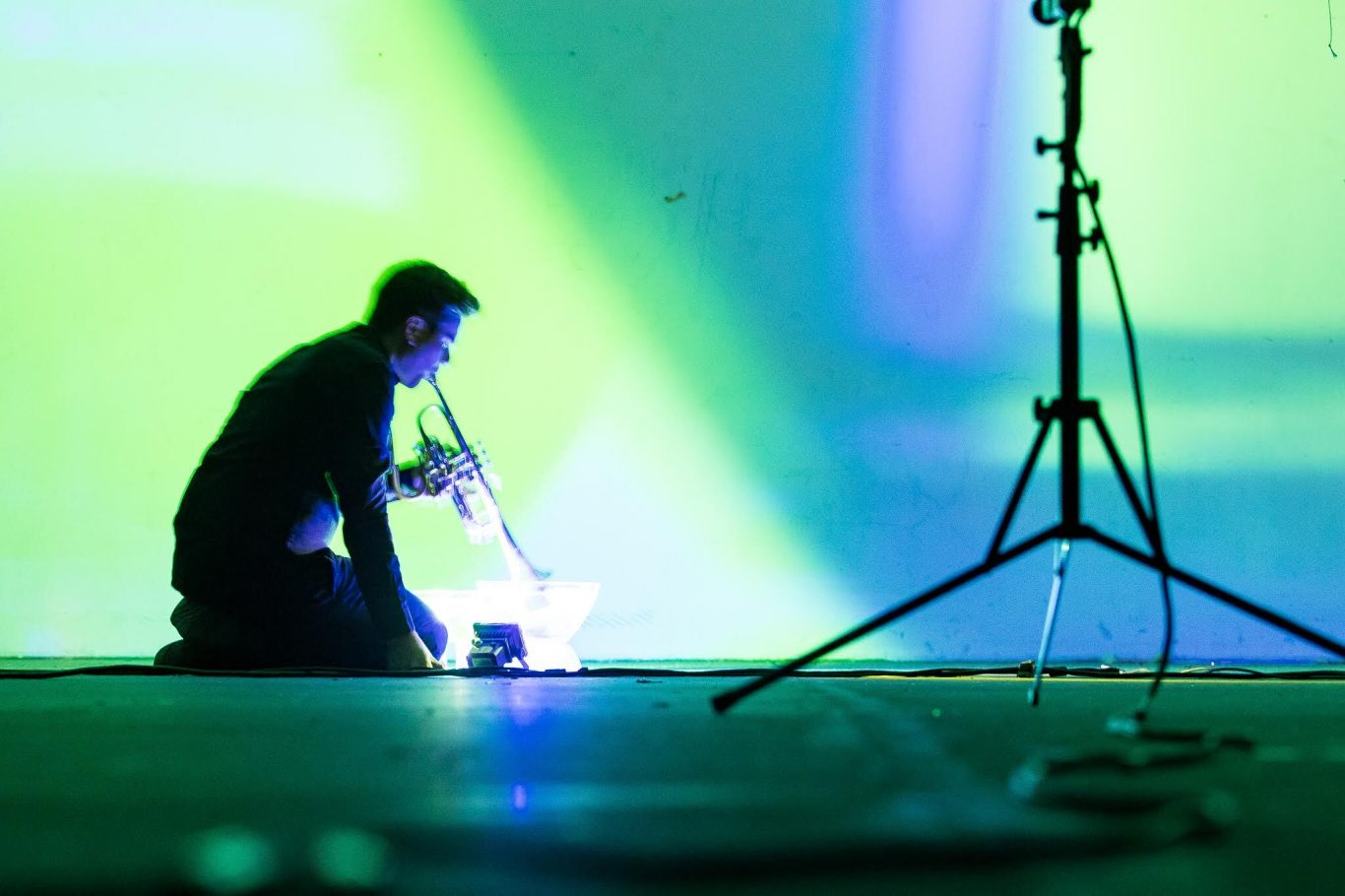 Across the Western Australian coast, alarm horns blare as sharks cross into areas of ocean and river now considered human domains. Within our cities, bullhorns and megaphones amplify human voices calling for justice and improved relationships with Country.

Inspired by Black Lives Matter chants of protest and the collective energy and histories of procession, Bullhorn is a new work by composers Clint Bracknell and Callum G’Froerer, and choreographer Trevor Ryan. Amplified Nyoongar singers and dancers accompanied by a large brass ensemble will turn their collective attention to the bilya (river), the home and crossing point for the bull shark.

Drawing on the Nyoongar bull shark song performance developed by Bracknell and Ryan, and first presented in Perth Festival 2021 with the Mayakeniny dance group, Bullhorn is a powerful collaboration of Nyoongar and contemporary forms of music, dance, song and experimental performance to create an electric experience for audiences.

Join us at sunset on the Walyalup (Fremantle) riverbank, in a procession of Nyoongar performers and members of the Western Australia Youth Jazz Orchestra (WAYJO), as they accompany the bull shark’s crossing from salt to fresh water, from the wardan (ocean) up the bilya (river).

Trevor Ryan is a gifted and versatile stage and screen performer, drama teacher, and NIDA graduate with a strong interest in Indigenous languages and cultures. His recent career highlights include performing as King Duncan in Hecate (Yirra Yaakin/Bell Shakespeare, 2020), a full Noongar-language adaptation of Shakespeare’s Macbeth; voice acting as Yoshida in the Noongar-dubbed version of the classic Bruce Lee film, Fist of Fury Noongar Daa (Perth Festival with Boomerang and Spear, 2021); and touring in FIFO (Yirra Yaakin/Goolarri Media, 2021). In between teaching drama with Monkey Baa Theatre Company, Trevor also appeared in Sunday in the Park with Frank for Short + Sweet; Warengesda – a Place of Mercy; Series 2 of The Circuit; My Girragundji with Canute Productions; ABC Radio The JeDy; and The Heights by ABC Productions. On the stage, Trevor has completed a season of Shakespeare WA, playing the roles of Balthasar in Comedy of Errors and Caliban/Jailer in The Tempest. He has toured with Banuba Films’ production of Jandamarra around northern WA. As a constant member of the Wadumbah Aboriginal Dance Group, Trevor performed for the Queen upon her arrival in Perth, and at the opening of CHOGM 2011. Amongst his busy performance schedule, Trevor is also researching the links between Noongar performance and Country through a Masters of Performing Arts degree at the Western Australia Academy of Performing Arts.

Beneath the Fremantle Traffic Bridge, Fremantle

Ends here: Beneath the Stirling Bridge

The work starts under the Fremantle Traffic Bridge, and proceeds along the Beach St Footpath and grassed area. The procession can be witnessed anywhere between the two bridges, but we recommend following along from start to finish.

This is a walking performance that will take place across a 60-minute duration. Patrons are encouraged to wear comfortable shoes, bring a hat or warm clothes and water.

This is an outdoor event. In the event of rain, the work will likely be postponed or cancelled.

While this is an open performance in a public space, we recommend coming on time to appreciate the full experience.

There are public toilets available next to Beach St Co, including all-access toilets.

The event area is located between the two Fremantle Traffic Bridges, on a grass area accessed along a flat pedestrian foothpath.

Parking: Accessible parking is available at East Street Jetty Car Park, which is a short walk (50m) to the event area.

The event invites audiences to walk for approximately 600m, in a slow procession with the artists and performers. Audiences are invited to walk with the procession, or alternatively pick a viewing location anywhere between the start and end point, to witness the procession going by.