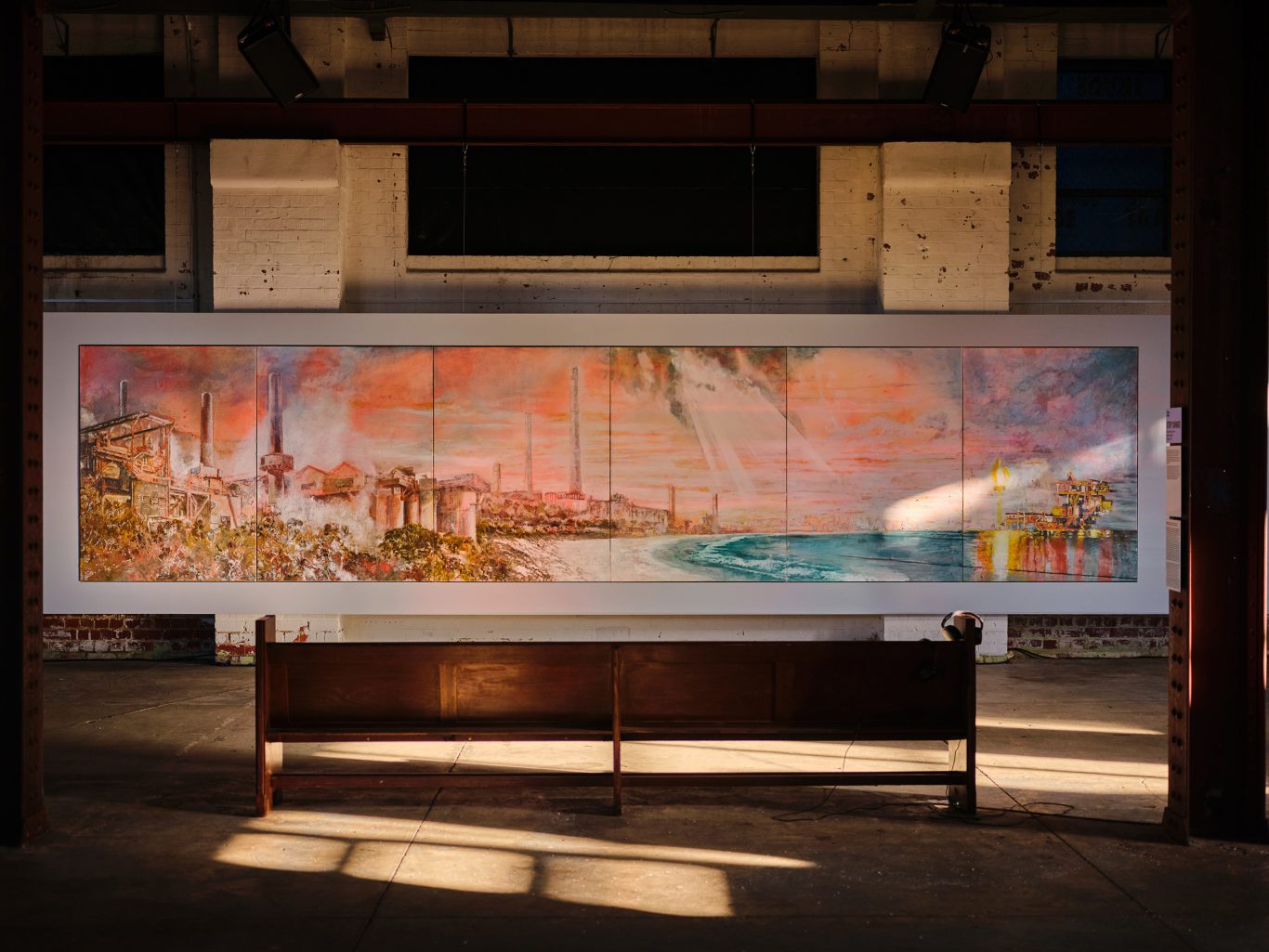 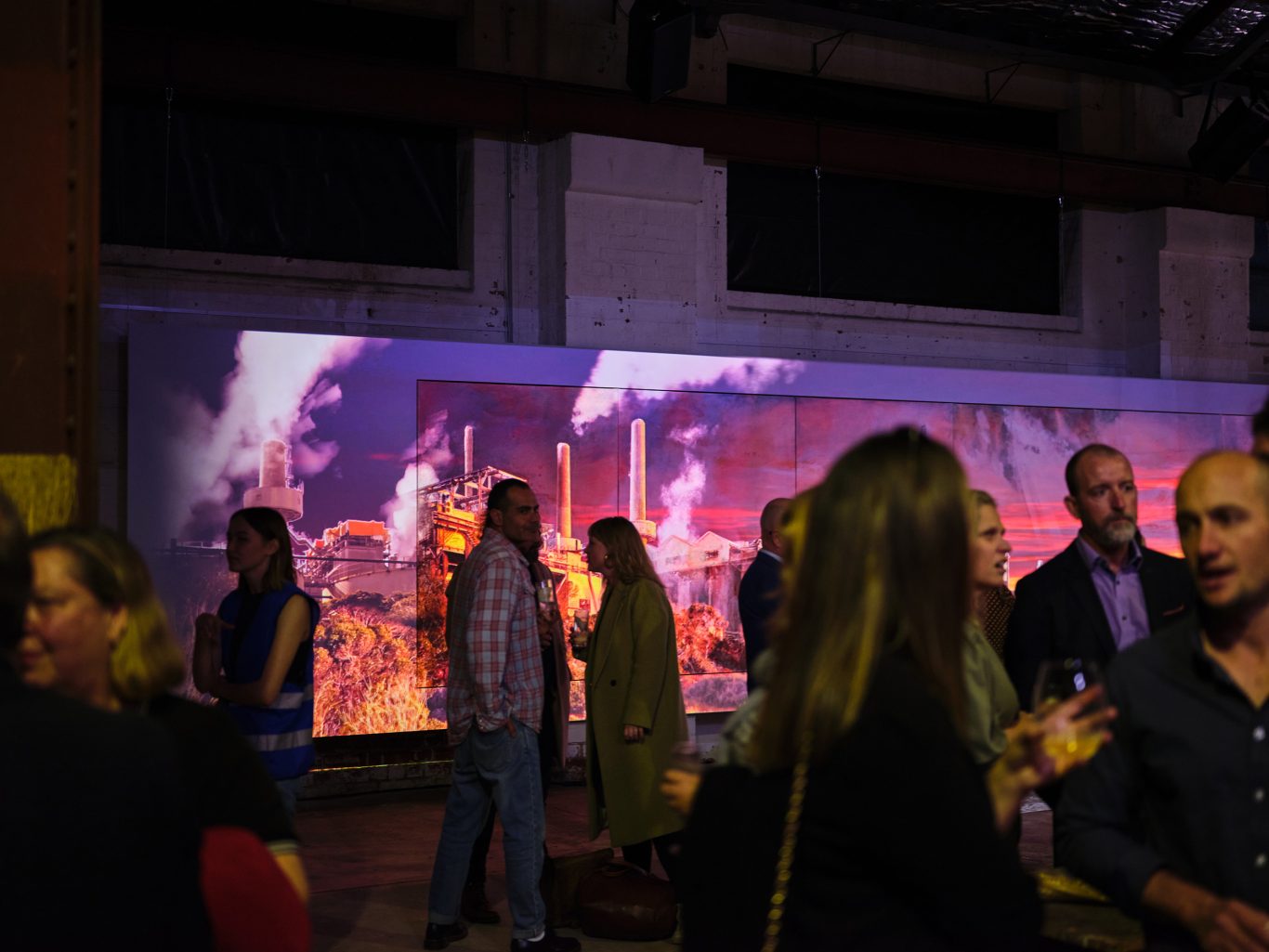 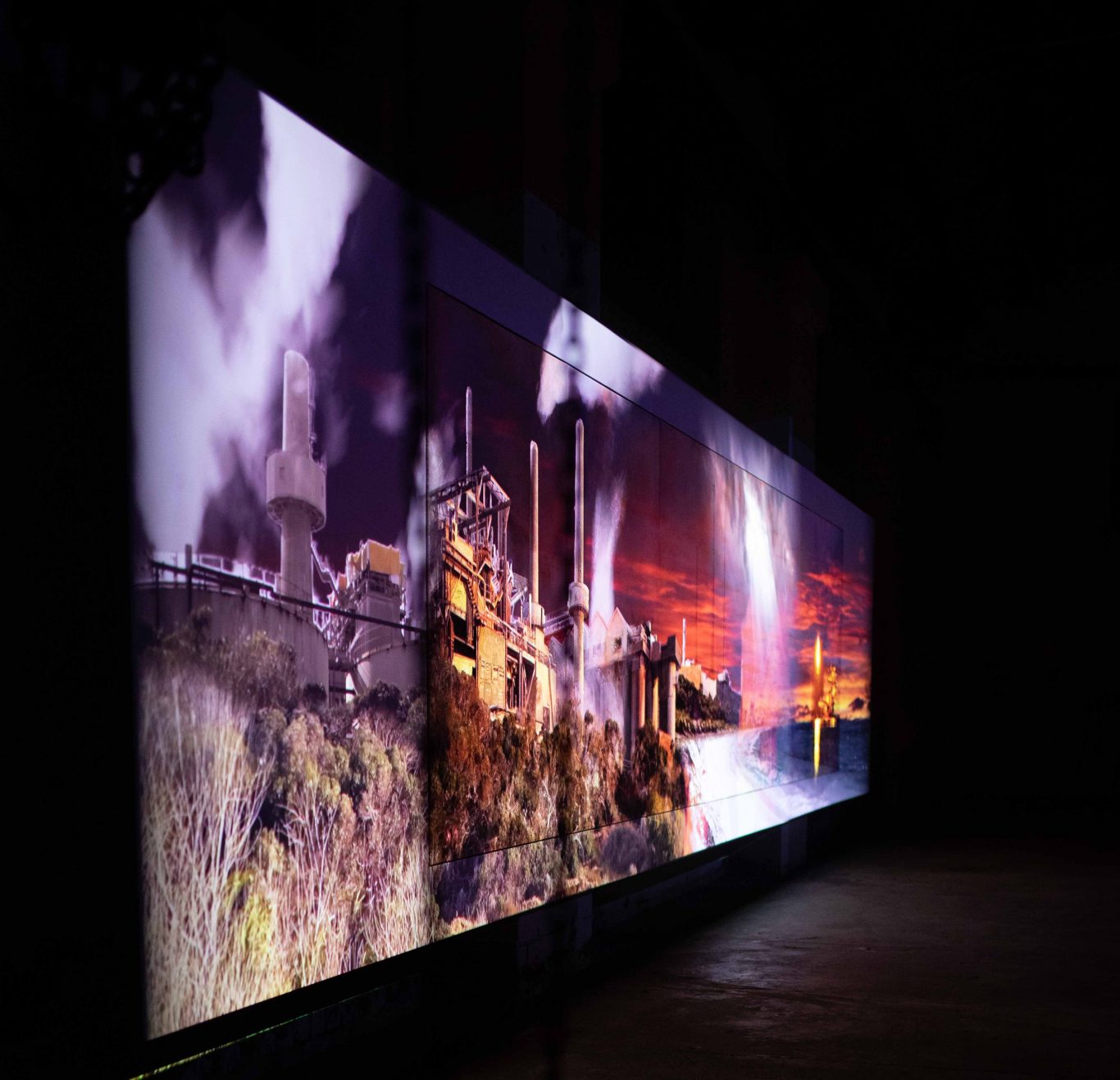 The third and final work in a collaborative series by Alexander Boynes, Mandy Martin and Tristen Parr, Step Change is a large-scale visual, video and sound work that explores the urgent need to transition in the age of climate crisis. Using the site of the Kwinana Industrial Area located alongside Derbarl Nara (Cockburn Sound), the work shifts between the real and the sublime, as the still becomes moving and the changing sonic atmospheres turns light to dark.

Kwinana is a busy and expanding industrial hub and a focal point in Western Australia for public calls to transition to clean energy sources, positioned against the WA Government’s on-going commitment to natural gas expansions in 2021. COVID-19 drew our attention to the benefits of radical economic ‘degrowth’ and its benefits to environmental health. Step Change looks to the urgent need for attention to climate change and asks us what kind of habitable planet we are leaving to future generations.

Step Change has been made possible through the support of the Minderoo Foundation Artist Fund.

Alexander Boynes is an artist, curator, and Program Manager at the Canberra Contemporary Art Space. He received his Bachelor of Visual Arts (Honours) at the ANU in Gold and Silversmithing; however, his practice has evolved to include painting, photography, print media, light-based work and video installation. He is represented in the collections of the Center for Art + Environment, Nevada Museum of Art (USA), Artbank Australia (Vic), the ACT Legislative Assembly (ACT), the University of Canberra (ACT), the Macquarie Group Collection (NSW) as well as numerous private collections throughout Australia and in London. His recent curatorial projects include Straight Outta Canberra (MAY▲SPACE, Sydney, 2018), and Blaze Twelve 2018 (CCAS Gorman Arts Centre, 2018). Previous exhibitions at CCAS include 2°— Art and Climate Change, 2016; Footy Fever, 2015, Blaze Nine, 2015, Action Stations — Peter Maloney and Louise Paramor, 2014, and The Triangle – Political Art in Canberra, 2013 in addition to co-curating numerous projects. In 2013 Boynes established PRAXIS, a multidisciplinary art collective with choreographer/ dancer Laura Boynes, and cellist/composer Tristen Parr to explore the link between visual art, performance, and sound.

Mandy Martin was a practising artist with a national and international reputation for conservation and landscape. She was born in 1952 in Adelaide and studied at the South Australian School of Art from 1972-75. Martin has held numerous exhibitions in Australia, Mexico and the USA. She has also been exhibited in France, Germany, Japan, Taiwan and Italy. Her works are in many public and private collections including the National Gallery of Australia, the Art Gallery of New South Wales, the National Gallery of Victoria, The Art Gallery of South Australia and other state collections and regional galleries. In the USA she is represented in the Guggenheim Museum New York; the Los Angeles Museum of Contemporary Art, the Nevada Museum of Art, Reno and many private collections. Martin was a lecturer at the School of Art, Australian National University between 1978 – 2003 and then a fellow there between 2003-06. She was an Adjunct Professor at the Fenner School of Environment and Society, Australian National University Canberra.

Based in Perth, Western Australia, Tristen Parr is a classically trained and versatile acoustic and electric cellist specialising in new music performance and performer-integrated sound design for theatre, dance and installation. He has toured extensively throughout Australia, America, Canada, Asia and Europe, and has recorded for Germany’s SWR & the ABC, performing across more than 50 recorded releases. Tristen is a founding member of electro-acoustic ensemble Decibel, silent film band Viola Dana and art makers Praxis Collective as well as being part of many ongoing projects. As a freelance sound designer, he has been commissioned by the likes of Louisville Ballet, Yirra Yaakin, LINK Dance

This is an indoor event, and protected from the elements. As it is a large warehouse space with limited heating/cooling, we recommend bringing weather appropriate clothing.

There are toilets, including all-access toilets in the venue. Water and seating is also available.

Parking and ramp access is available from Tuckfield Oval Parkland, Fremantle. The event area is accessed down a ramp and a footpath, and is approximately  an 180m walk.